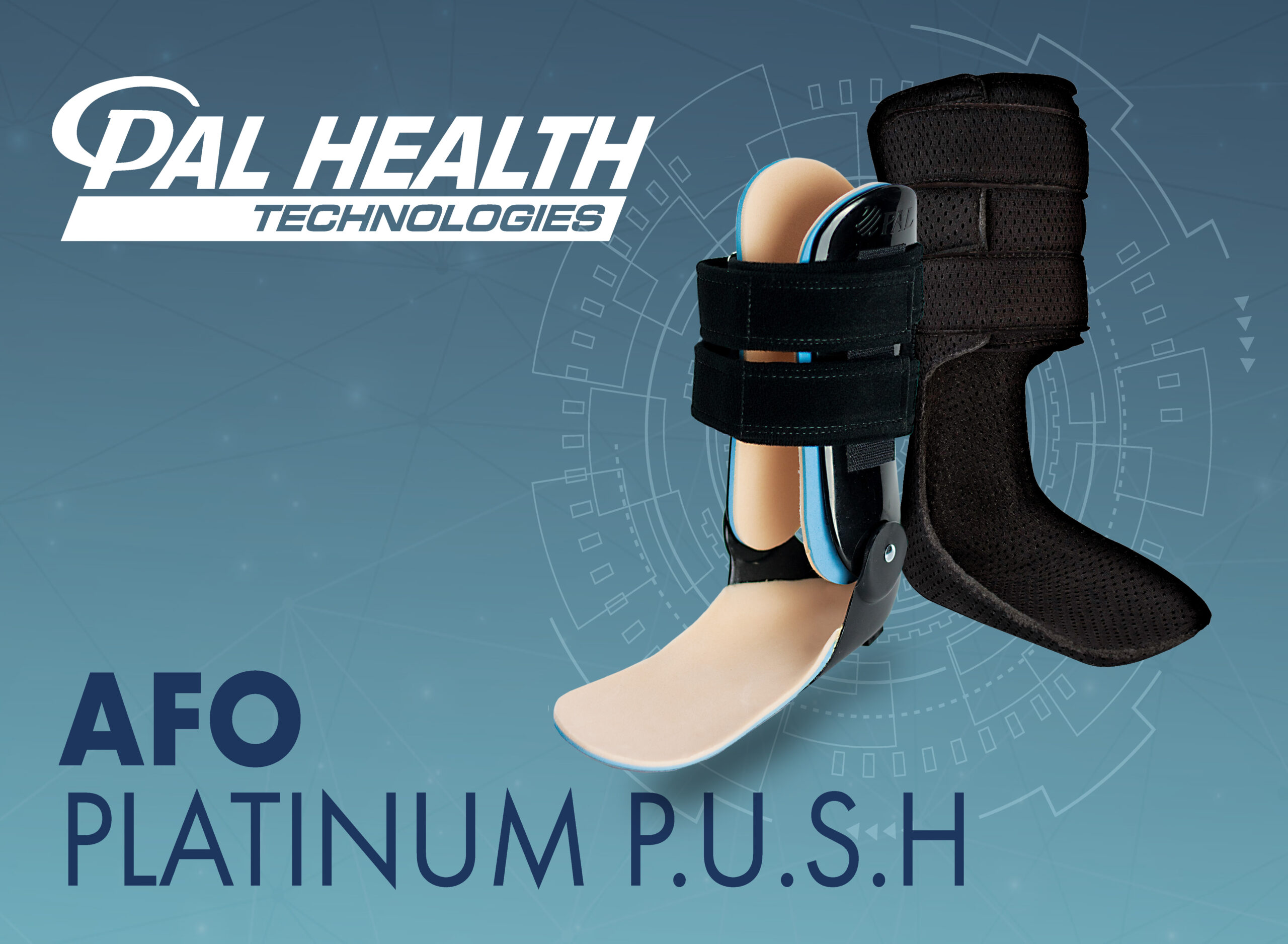 Element 78 products, specifically the Platinum P.U.S.H. and Platinum Fusion, provide additional support compared with other AFOs because they wrap around the back of the calf, explained Josh Robertson, PAL vice president of research and development.

“What makes them valuable is they treat the most common clinical indications of the ankle,” said AFO Supervisor Waylon Edwards.
Patients with PTTD (posterior tibial tendon dysfunction), pronation issues, sinus tarsi syndrome, post-trauma, chronic ankle instability, foot drop, sprains and ulcerated patients are among those who could benefit from Platinum P.U.S.H. and Platinum Fusion.

But many doctors’ offices don’t realize that PAL offers Platinum P.U.S.H. and Fusion, Robertson said. “Many more patients could benefit,” he said.

The Element 78 Collection gets its name from 78 being the atomic number for platinum. Products in PAL’s AFO line all start with the name Platinum.
Fusion is taller than the P.U.S.H., is encased in leather and has a lace closure. “It offers more stability for patients who require more control,” Edwards said. Fusion also offers intrinsic posting. Intrinsic posting is molding into the orthotic shell material the angle or degree of the shell material desired or prescribed.

P.U.S.H. (pivot upright split hinge) has a Velcro strap closure. With P.U.S.H., PAL technicians also can put on a heel lift for patients with leg length discrepancy.
“The P.U.S.H. helps to control abnormal motion in the frontal and transverse planes,” Robertson said. “The Fusion helps to stabilize the ankle while allowing motion in the sagittal plane.”

Each orthotic is custom-made and hand-fabricated at PAL’s lab in Pekin, Illinois, in a multi-step process.
The fabrication process begins when PAL AFO technicians receive a negative cast of a patient’s foot from a doctor. “We do necessary corrections to the negative cast and then we pour the negative cast with liquid plaster and extract the positive model when it’s cured,” Edwards said.

“The springing action of the Tamarack offers a major assistance to dorsiflexion, which would assist people with drop foot (foot drop),” Edwards said.

Next, technicians find the axis of the ankle joint to install a Tamarack dummy mold to the positive mold. The positive mold is lined with a thin layer of nylon stocking, followed by an encasing of the entire mold in heated Thermoplastic. The mold needs to cure for 24 hours.

After the positive mold is cured, trim lines are marked on the plastic shell and it is extracted from the positive mold. Once extracted, the edges of the shell are smoothed out.
Next, the Tamarack uprights are installed to connect the orthotic uprights to the foot plate.

For the P.U.S.H., the buckle and Velcro strap are added next.

“After that, I add the padding and do a light grinding to bring the orthotic to its final shape and smoothness and then it’s off to shipping,” Edwards said.
For the Fusion, the inside is lined with soft leather and the outside is covered with thicker, more rigid leather. Then, holes are drilled to insert eyelets for the laces, grommets are hammered onto the eyelets, the tongue is sewn to the brace and the laces are added.

From the time an order is received at the lab until the orthotic is shipped out is ten business days. For more information, visit xtremity3d.com. To place an order, call PAL customer service at 800-223-2957.